A Photography book, as a visual example of the theory that I wrote about in my first book, titled: Documentary Photography.

Cherry Orchard is a Photography book, as a visual example of the theory that I wrote about in my first book, titled: Documentary Photography. So it is a kind of practice or experiment for that theory.

Here, you can read and see some parts of the book’s preface and several photos from this photography project:

At the suggestion of a friend, I put the city behind and sought the comfort of the countryside for a while, enjoying the company of my fiancée and a family friend. We traveled to Neyshabour. On a lazy afternoon, we decided to take a walk in a nearby orchard and buy sour cherries. When we were leaving the orchard, I fell behind the others and lost my way among the trees. I decided to jump over a broken fence and make my way from there; right then, I came across a crumpled piece of newspaper, colored red with the juice of the cherries. The political slogans on the paper were visible among the red colorings. I had no camera with me, so I took out my cellphone and took a photo, recording my amazement at seeing this sight. The incident saturated my imagination, filling it with the scent of poetry and politics. I was so mesmerized that I felt the time had stopped for a while. I could see myself as if in a silent movie, floating among the poetry and politics. I came to my senses with the voice of my friends calling for me. The first person I saw was my fiancée. I showed the red newspaper to her, she joined me in savoring the intoxicating scene. We followed the trail and found out that the owner of the orchard had unknowingly used some old newspapers belonging to the time of the revolution. He had no idea that he had created a second and possibly a third layer of meaning, depicting the Iranian contemporary history and its reality. 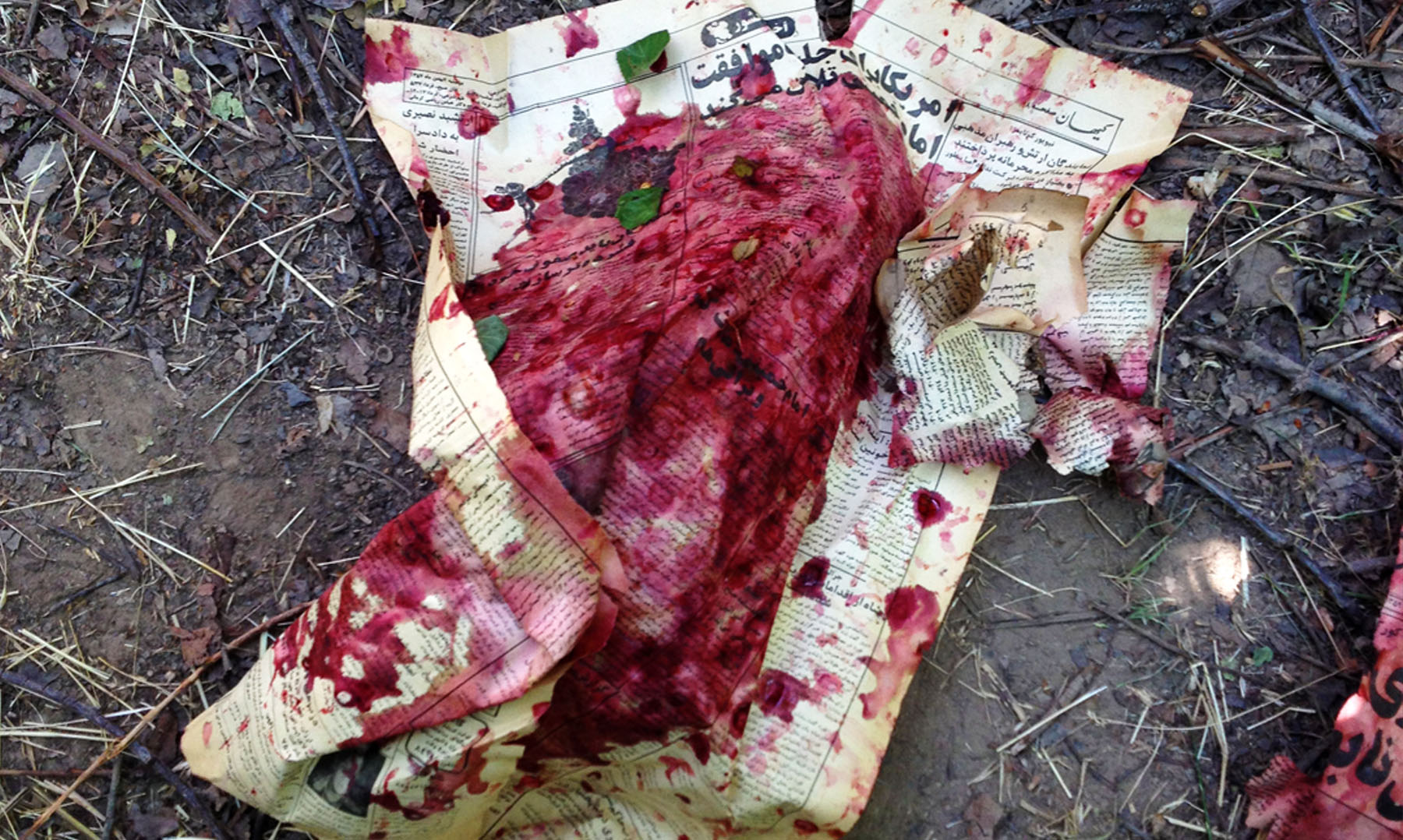 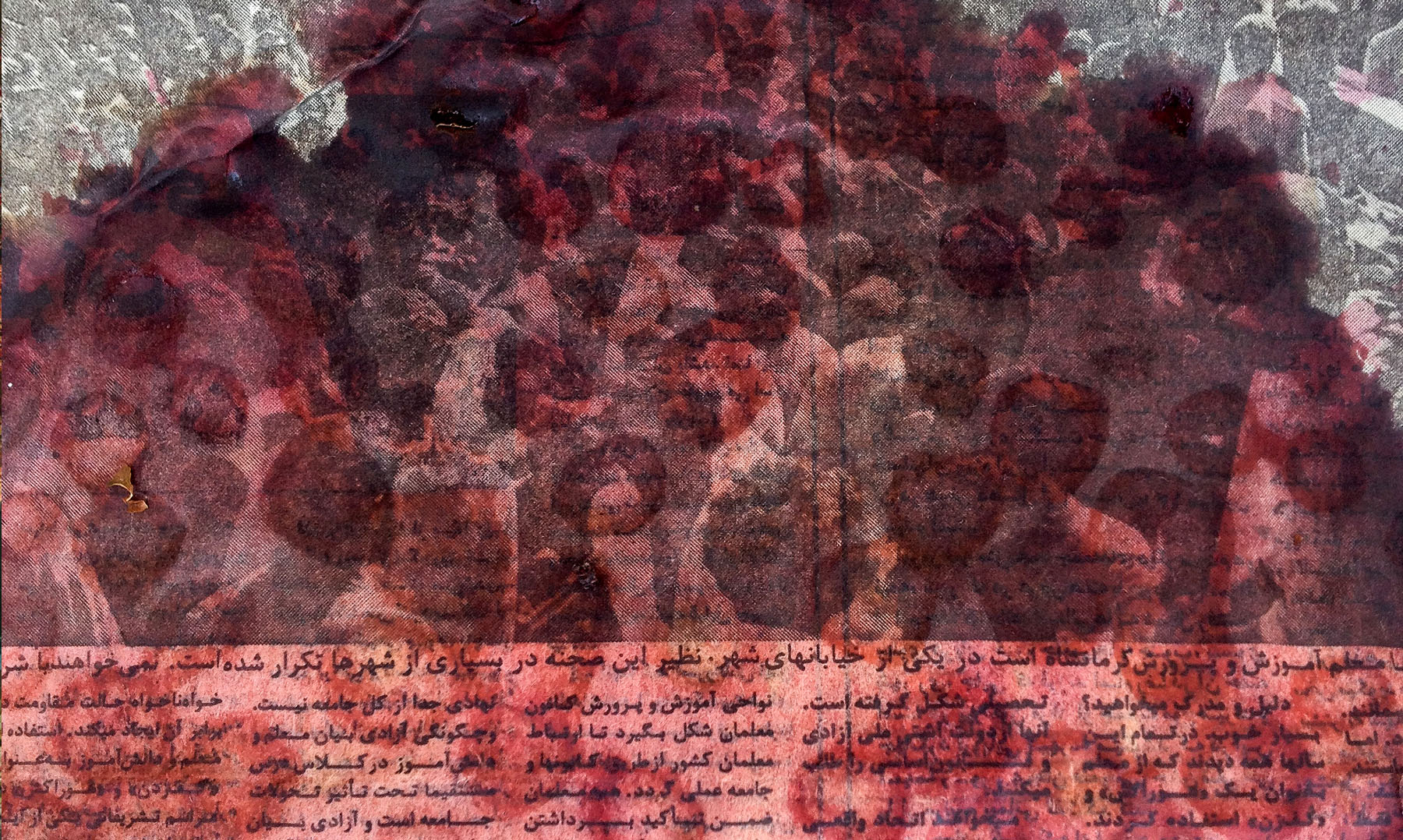 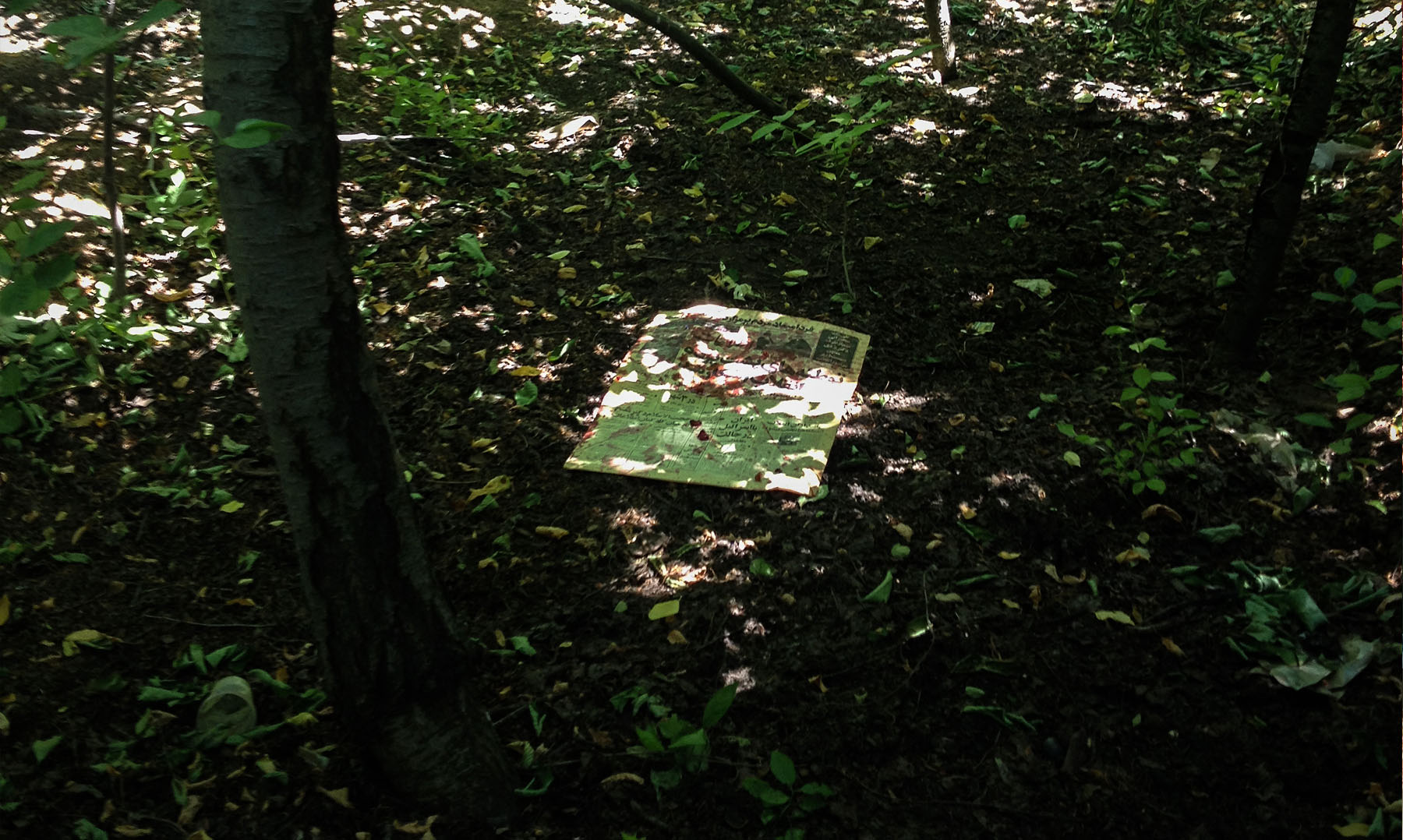 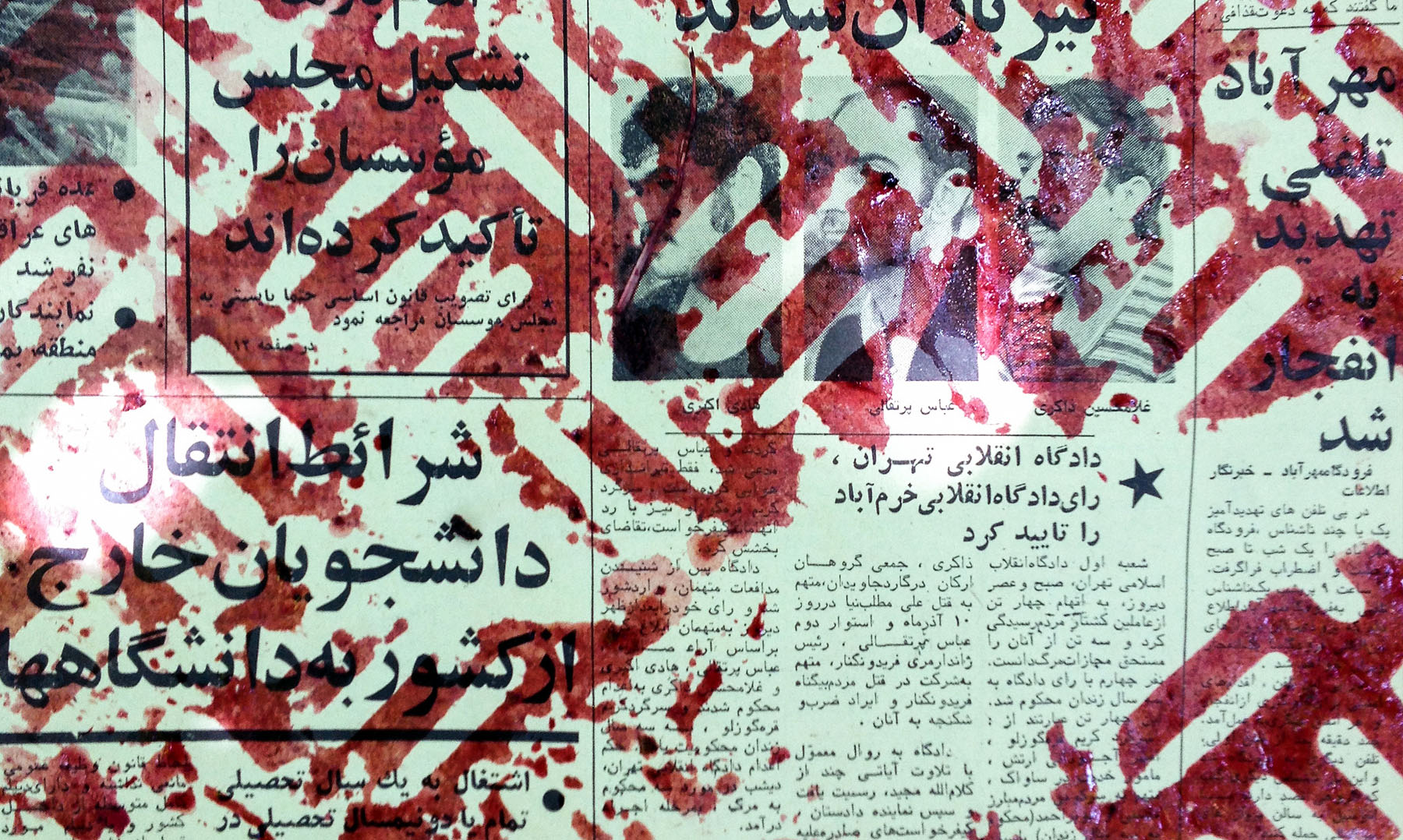 On our way back home, our view of the “documentary encounter” was changed. I asked myself why I should be in that particular spot at that time. And if I had not been there, would that makes it unreal one? I was astounded at the similarity between the outside events and my own take on the revolution and Poem and the mixture of them in real life. Iranian Masters of philosophy and literature have compared “reality” to an “orchard”, yet I had satisfaction feeling having experienced that metaphor in real. I kept reminding myself that: this is the type of documenting in which the photographer does not seek a specific issue by an intentional act; rather, he is in search of the integrated reality among the issues are surrounding him. Therefore, the photographer waits for the “reality” to show itself in a more comprehensive form. Even the anxiety would not stop him from becoming an accomplice to the reality in which he lives. Following this mindset, and for a brief second, a door from the reality opens up for him. It does not matter where he stands in the world, so I never imagined to encounter that “unified reality” in a village near Neyshabour! A remote Orchard that nobody knows about except the rural people. 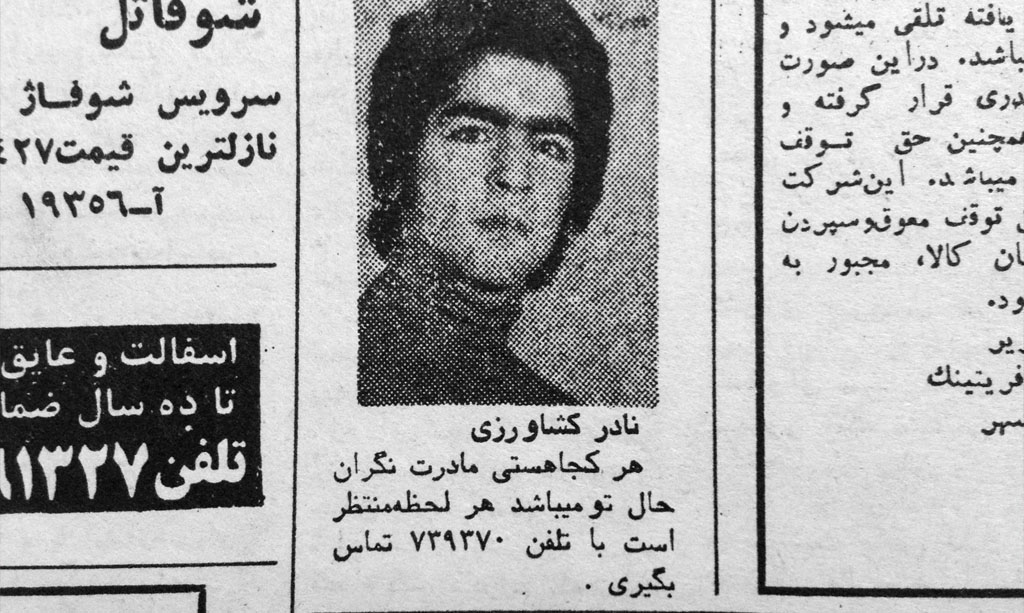 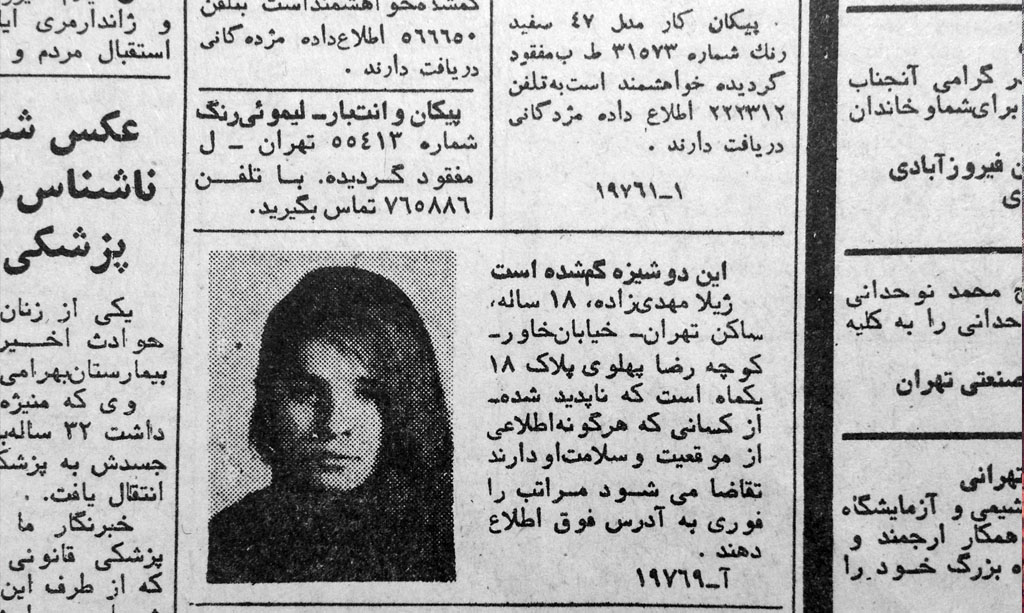 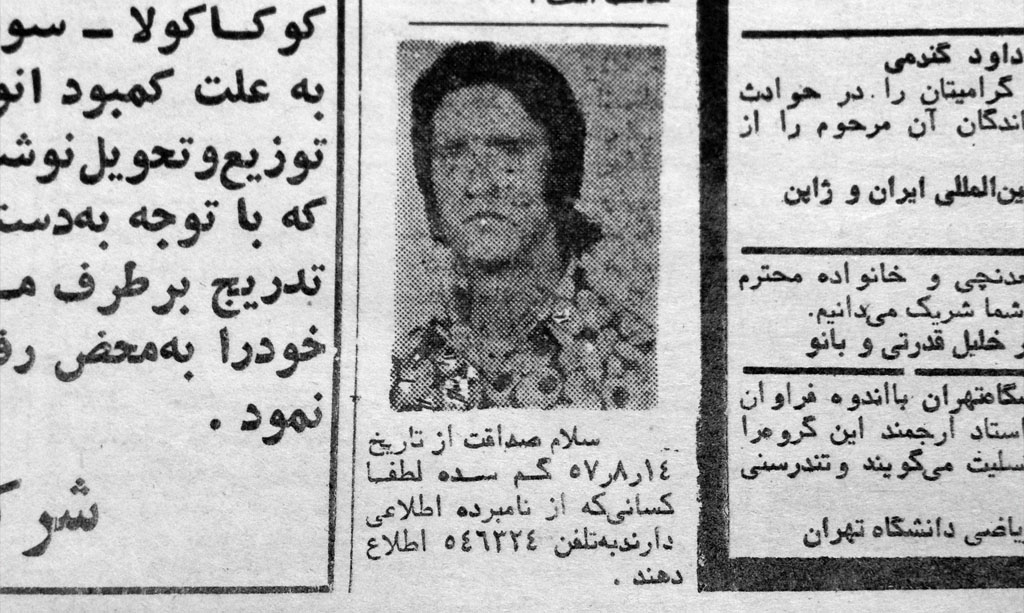 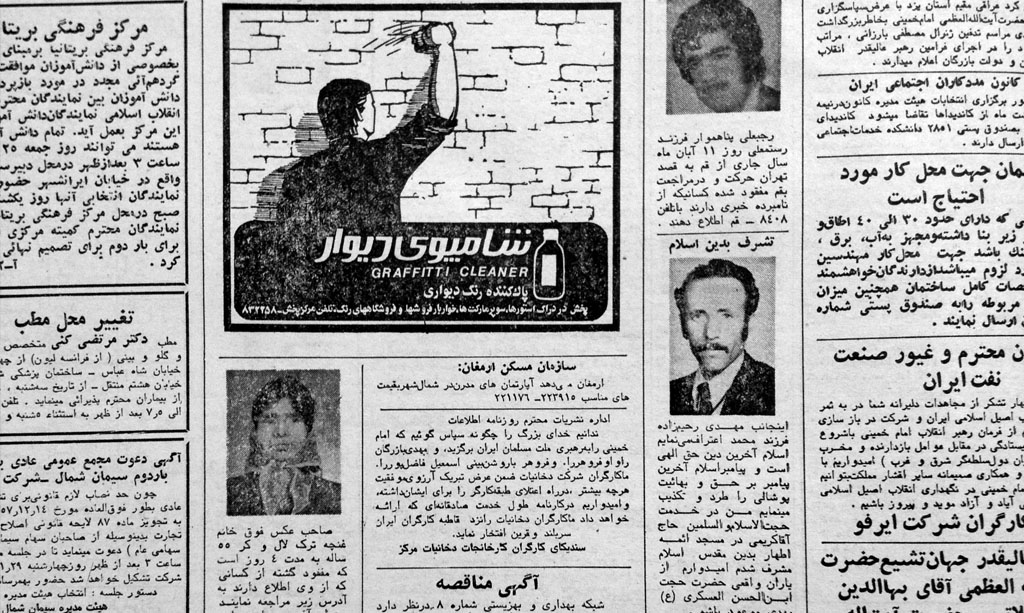 Documenting time as history takes on different shapes; sometimes the historian choses to bring up a simile instead of jotting down the exact details of an event or writing biographies, since one of the factors which frames history within the reality is an attempt to discover the meaningful correlation between issues but that correlation on the surface of event look invisible.
On the following days, I kept taking photos of the papers in the orchard and collecting them. I found some small missing person announcements on those papers. Seeing the lonely faces of people who had acted on the personal or political motivations against the norms and usual benefits of an ordinary human was another aspect of the history which its bearings had painted the political slogans in blood red. I returned to Tehran with the two episodes and since the missing people ads were only a few, I visited the library of the parliament and found the same papers to take more pictures of these missing people. “The missing” and its accompanying story is just one actualization of the infinite possibilities that did not take place in the course of history, now fading from the memories of the middle classes. 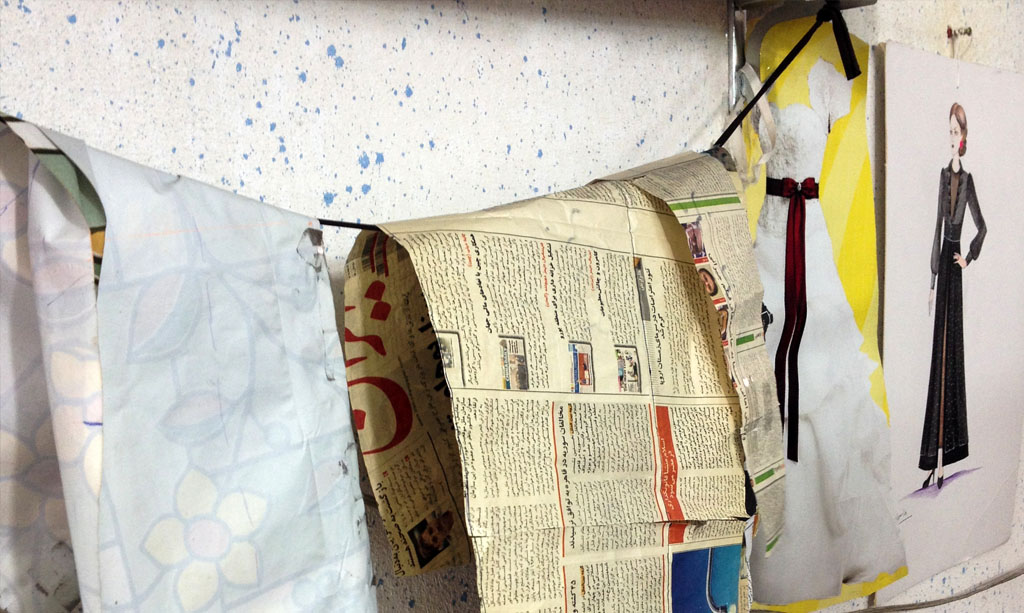 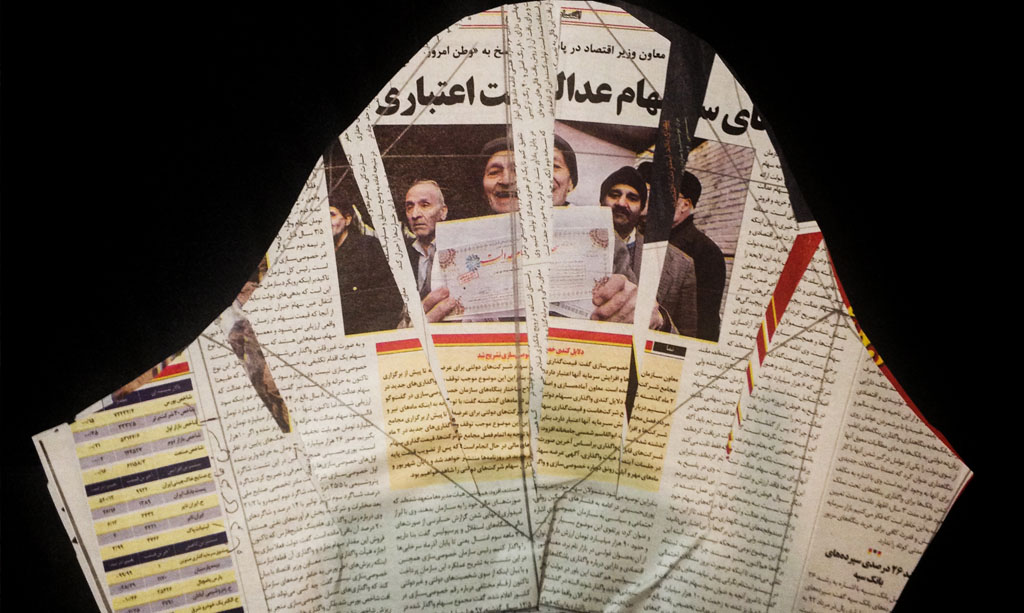 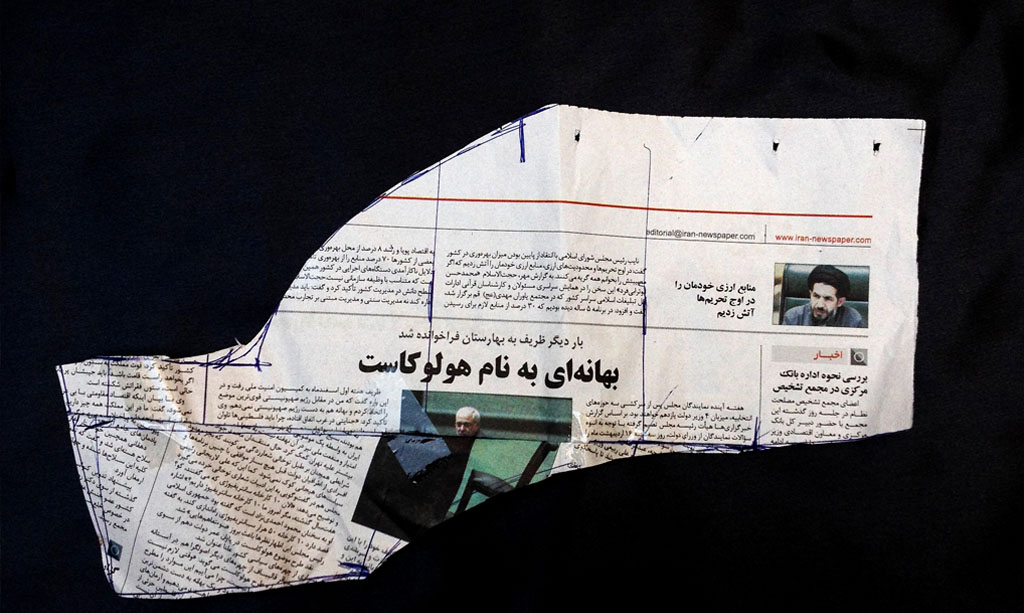 During the preparations for our wedding, I travelled to Shiraz, still carrying the burden of those two episodes in Neyshabour in my heart and my eyes. In one hot afternoon, they let me wait inside the dressmaker’s shop where my wife was trying on her wedding gown. In the first few moments, watching different dresses that were made to suit the customers’ wishes and the people trying different shapes and colors for their dresses, I walked into the third episode. This part includes papers cut as patterns for making a dress. In these papers that belong to the current time, there are no missing person ads; the environment is no longer an orchard, but a dressmaker’s shop in an unknown place. And the fact that no one knows where it is and who the dressmaker is points to the history that refuses to take on the responsibility of the “gap between the history and current reality”